theforceuk said:
Reports he’s on £200k a week at Forest??? WTF!!! Ok they saved on the free transfer but no way should Lingard be in the top 15 best paid PL players list.
Click to expand...

If that’s true I take back what I said - although, and this is a big IF, if his goals/assists keep them up is it 10mil well spent?

Apparently he verbally agreed to join WHU on Monday and posted some stupid TikTok stuff that firmly pointed to that as well. Forest came in late in the day, offering stupid money. He came back to WHU saying he wanted them to match Forest's offer. WHU said no. The rest is history. Utter bellend. Purely about the money.

Yes complete bell end West Ham have swerved a turd IMO and you can’t polish a turd. I agree Forest stand a better chance of staying up with him at the club, he’s ideal for a team that will spend most the season in there own half with space to run into. The social media circus around him is part and parcel of signing him unfortunately.
W

WH offered him 90kpw and a multi year deal. Forest offered 130kpw and a 1 yr deal. He picked the latter. Not sure I can get my head round it to be honest. WH are a bigger and better club*. They have European football and will be challenging for Europe again this year. Forest will be bottom six, if not relegated. Why pick the latter?

He may play more at Forest but he’s hardly gonna be a barely seen sub at WH. I guess he gets a nice signing on fee (though WH would have given him one too) and then another next year when he pisses off somewhere else.

Seems very mercenary to me.


*Yes, I know Forest have 2 European cup wins, but those were over 40yrs ago and if we count them then Forest are bigger than City, Arsenal and Spurs, and just as big as Chelsea and Juventus.

Zinchenko to Arsenal, is that the fourth City player they have signed this window? They're all decent players, just seems like a bit of a strange tactic to try and get back all the players he used to work with for Pep.

edd_jedi said:
Zinchenko to Arsenal, is that the fourth City player they have signed this window? They're all decent players, just seems like a bit of a strange tactic to try and get back all the players he used to work with for Pep.
Click to expand...

2nd. We got Turner, the USA keeper from the MLS (deal done in Jan but transfer complete now)
Marquinos from Brazil (just to annoy Wolves as they apparently had a pre contract

)
Jesus from City
Vieira from Porto and now Zinchenko from City. As much as it’s a bit of a networking type signing managers have always done it I guess
W

Yeah, he’s not a bad player but I’m not sure how you catch up eith City by buying their unwanted swuad players. But then Arsenal are probably trying to mkae top 4 rather than chalkenege City.

City have done well selling this summer. 45m for Jesus who always flattered to deceive, the same for Sterling who had a yr left on his contract and now 35 for Zinchenko who was back up left back. £125m for players they probably didn't need.

What did they pay for Haaland, 65m? Then 45m for Phillips and however much for Alvarez (?). Net spend can’t be a huge amount.

Kounde to Chelsea looks a good one too. Koulibaly is solid as well. Two good CB’s for them. They just need some back up full backs now, assuming Alonso and Azpuelecueta are away. Here’s hoping they both take a while to get used to the pace of the PL

Oh my bad I thought it was more than that.

With the caveat of “it’s only pre season” I don’t think it’s too bad sticking 4 past Chelsea and 6 past Sevilla. Cue 3-0 loss on Friday to Palace
W

Aye, someone like Jesus bagging a tonne in pre season just makes me think he will stink this season. Lukaku started last season well and then imploded. Sometimes it goes the other way but I can't help thinking it has that feel about it.

Arsenal’s squad still looks thin to me. Especially as Tavares is away (no loss) and a few others like Bellerin want out. Given there are 5 subs allowed this year I do worry that could hurt Arsenal against sides with big/better squads, especially as the PL is so congested this yr cos of the stupid WC In Nov/Dec.

Currently the squad is about 33 senior players which feels bloated. There’s another five or six to leave I think ideally and another two or three to bring in. Oh and the Partey situation to resolve. If what she has said is true he should be ****ed off but I’ll not hold my breath if plod does nothing
W

Aye there may be a lot of players there but far too many are utter turd.

Arsenal are playing a dangerous game with Partey. Is a good player and very important to them, but if those allegations are true they will look bad. Much as I don't like Utd they handled the Greenwood thing a lot better. Suspend him and await what the police say. If he is innocent you have the moral high ground (and you may be able to claim some of his wages back against your insurance) If he is not then you have done the right thing.
I'm all for innocent until proven guilty, but given his name and the allegations/evidence is out in the public, it does look bad that he is still playing. I can't help but feel if that was some kid in their youth system who would have been ****ed out in seconds.

UTD need to sack/sell every single one and I’m not even a fan: 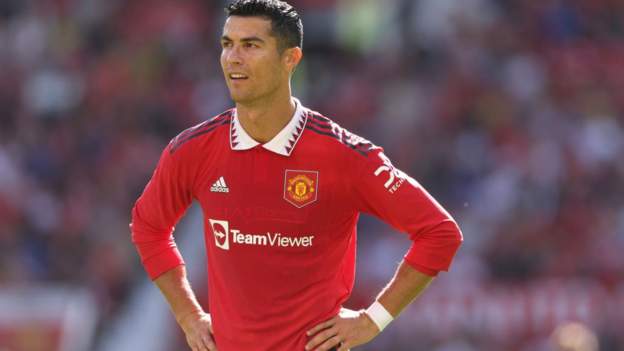 Most of that squad is impossible to sell as they are on to bigger contracts. We’ve just loaned out Telez agreeing to pay half his wages. Just a joke. Ten Hag has been asked to clean out a swimming pool full of **** without a skip basically.

Yep 200k+ a week and they can't even wait 10 minutes to leave, how entitled are some footballers these days? I honestly think we would see a huge improvement in quality if footballers wages went into a trust fund that they can't touch til retirement (save for some reasonable living expenses.)

Will never happen, but money has ruined the game. I saw a photo a couple of days ago of Glenn Hoddle standing next to the car he bought after joining Spurs - a Saab 900! It really has gone from a working man's game to Kanye West world.

I know I’m now putting an Arsenal spin on this but that’s partly why I’m happy (mostly) with the Arteta revolution at Arsenal. It’s pretty much a complete cultural reset of the club

Yep it's great to bring the players back down to earth. I guess just like real life some people can handle money and others can't, Harry Kane or Salah don't seem to drop their work rate because of their wealth, then you get players like Dele Alli... 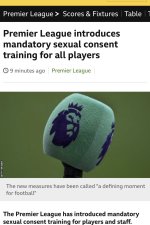 Now I’m obviously in favour of people keeping it in their pants unless invited to do otherwise but exactly how **** is the world we live in that this needs to be a thing?

And if they really need to spell it out to these morons then just show them this:

Dont make them drink the tea!

Again I think it all comes down to the fame and money. If you're 20, loaded and have girls throwing themselves at you, you're going to have to learn pretty quickly where the line is. Also worth remebering most of these guys will have been at football academies since their early teens so will have missed out on the life and social skills most of us learn at school/uni/work. So I think it's a good thing.