sith-smith said:
Obviously it is your choice, but I really wouldn't change the bubble. Stick with the original sealed one, even if damaged. Great piece.
Click to expand...

Yeah I think I’ll leave it.
No guarantees of getting off cleanly & the potential for further damage. Had to be really careful putting R2 in as it was quite brittle feeling & didn’t want to burst it any more.
In now & safe in a case, happy with it

colin310 said:
Another add for me…ROTJ 65 R2D2 Sensorscope unpunched with bubble.
Bubble has some damage where R2 has been removed but has allowed me to put mine in & displays nicely in a DC Deflector case.
Option always there to replace the bubble but no rush to do that

Looks great, I would say the same keep the bubble as it’s sealed, don’t worry about the damage

I have a run of items that have this image on it so I was pleased to add this one recently, it's a proof of a burger king card. It took just under a year to arrive having had a mysterious postal detour to Korea at one point but finally here thanks to the persistence of the seller. 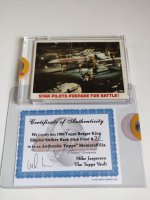 It’s battered and has an open bubble. But it’s ok for now.

Fantastic condition for a Gammy Guard Tri Logo, which side is the bubble cut?

Yes was happy with this , Down the right hand side as you look at it is the slice

Those are some nice trilogos Congrats

I've not bought much this past year or so - there are a few items I'm after but with prices so nuts I really can't justify spending so much money. What I've been doing instead is keeping an eye out for items with price stickers from my childhood toy shops... and I've been lucky to buy two! Both were bought locally.

So we have an Ewok Glider from 'Conways Arts & Crafts', which was based in Keighley, West Yorks. It's only recently they closed, which is a shame as they were the last toy shop standing from my childhood.) Interestingly, I have a Speeder Bike from the same store which has a completely different price sticker on it. 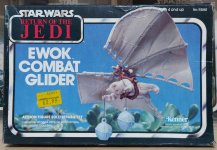 I also have this Klaatu, which is a little bit special. Carters of Bradford was my main toy shop and would almost certainly be where my Grandma would've bought me the exact same figure (100% remember it being Palitoy, not Kenner) as a Christmas present back in the 80s. As an added bonus this is one of the reduced figures that was kicking round long after the toys had fallen out of fashion. It'd already been reduced once before being reduced again to 45p!

It was in bad shape when I bought it but with a boiling kettle, some heavy books and a little patience it's flattened out really, really well. It's now sitting on my shelf with my Klaatu Skiff Guard... which also has a Carters sticker (£1.75 price sticker)! I feel a focus starting... 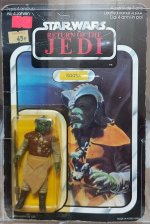 Found these at the carboot recently and they both cost 50p each Bargain! 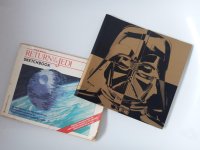 poncho said:
Found these at the carboot recently and they both cost 50p each Bargain!

Absolute bargain.
That ”from Concept…” book has cost me a fortune over the years as that was what got me hooked on collecting in the first place. I used the centre figure spread as a mark off sheet when i was out and about at toy fairs back in the days before in internet.

poncho said:
Found these at the carboot recently and they both cost 50p each Bargain!
Click to expand...

Great books! Agree with Nick, 'From Concept...' is one of the books that really got me hooked on SW again in the 90's.

Picked this up at Echo a few weeks back. The box is battered and the bike is loose with no flaps or tray. But it's all about the price sticker for me. Trents was my go to shop in Swindon. Absolutely made up to find this.