Moving into the second group sees what looks a much tighter group on paper.

Luke X-Wing Pilot will start the favourite due to his former appearances, a quarter finalist in both 2015 and 2019, but for the Pilot that is as good as it gets, but he has never failed to clear the group stages although having gotten through he has then been defeated in the first knockout stage on no less than 6 occasions, with those two quarter final appearances the only time he has.

Gamorrean Guard with their new found screen time could be a serious rival for him in this group, although three of the last four years he has failed to clear the group stage and best performance to date was one trip to the third round in 2017. Han Bespin is another that has only cleared the group stage on half the previous tournaments and then usually leaves the contest in the second round. Whilst rebel Commando and Nikto have never gotten beyond this stage, Weequay can only boast that on one ocassion too. Zuckuss has however cleared the group stages on 4 of the 8 previous attempts.

Clearly a wide open group, but which two will progress to the knockouts this year? 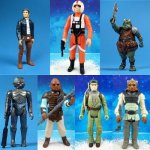 Same for me in that order

GG was the only figure I had two of as a kid and a personal favourite. Tight between LXW and Zuckuss but I plumped for the bright orange jumpsuit floppy fringed gunslinger

Han Bespin and Zuckuss for me

luke and gamorrean guard got my vote

This is a tough one, I've always really disliked the Han Bespin figure for some reason!
S

Comfortable victory for Luke X-Wing for top spot in this group, but Han Bespin who has so often disappointed beats the Gam Guard by a single vote to claim the runners up spot and progress to the knockouts.

Shame. The GG is a great figure and Han Bespin the most overrated in the entire line IMO.

TheJabbaWookie said:
Shame. The GG is a great figure and Han Bespin the most overrated in the entire line IMO.
Click to expand...

I agree, the gamorrean guard is a better figure