England, Tottenham and Chelsea legend Jimmy Greaves has died aged 81. The greatest goalscorer this country has ever produced, his records in the game have stood for decades, and will take quite some beating!

When I was young, I first came to know him through 'Saint and Greavsie', the ITV football show, and it wasn't until later that I learned that both he and Ian St John had been great footballers, rather than simply football TV show presenters

A very funny and witty man, he forged a career on TV in addition to 'Saint and Greavsie', appearing on various shows, including 'TV-AM' as a TV critic, where I remember him ripping mercilessly into Michael Praed for leaving 'Robin of Sherwood' where he was an action star, to join 'Dynasty' where he played (as he termed it) a 'prannie' . I still laugh when I think about it to this day! 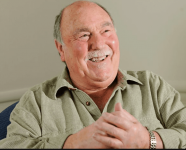 Yes, long before my time but a hero at Spurs and I do remember him as a pundit in my early years. RIP.

RIP my memories are of him as a pundit sad loss

no lover of football here, but i remember him, always seemed like a real gent, he had a good innings, RIP

Sad loss, what a player. Just about remember him as a pundit, 44 goals for England in 57 games. R.I.P.
You must log in or register to reply here.

Jimmy and his Avatar!