Rather than clog up the latest acquisitions thread, I thought I'd start a discussion here

Has anyone else had a go at improving the new Retro Collection figures?

I've had mixed results with the stickers. Most came off fine, hairdryer then gently peeled one edge. Takes a while to get it started. Once you've got enough peeled to get grip, you can heat and pull. Some left some residue, which comes off with patience and furniture polish. Need to be careful here, as the litho on these is nowhere near as tough as on vintage cards.

However, the ones on Greef and Cara were awful! They were welded on and just wouldn't peel in one piece. Both damaged the litho, so I ended up putting one of the stickers I got off in one piece back on to cover the damage on the Greef card

The leaflets are easier, just used a Stanley knife inserted at the bottom of the bubble where it's not stuck down, then carefully followed the line of the bubble edge down into the bottom left corner and about a third of the way up the left hand side. Then used tweezers to remove the leaflet and sealed back up with clear PVA applied with a brush (as per palifan's advice years ago!) and then clothes pegs to hold together for a few hours. You wouldn't know they had been opened 8)

Here are a couple of mine: 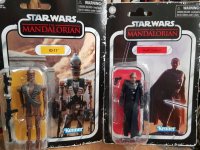 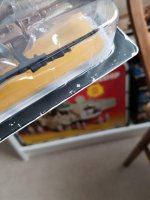 Here's the Tarkin I did a while ago. Removed leaflet, sticker and bubble tray. Added footer and Palitoy logo. 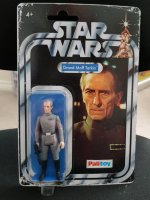 Use lighter fluid- stickers come off with ease

Is it kind to the flimsy Retro Collection cards? Will have to give it a go...

Just a side note. I wouldn’t recommend using furniture polish to remove any residue. Lighter fluid is the thing to use. A small amount applied to paper towel lightly rubbed over the affected area will do the trick.

I haven’t even tried to fiddle with the stickers. I have all 3 waves and the limited editions. The prototype Vader has an exotic sticker!

I opened the other 7 but for now I’m keeping this one on the card. Sticker peeled off by hand, no heat or chemicals. The leaflet came out by using a modelling knife to lift the bubble about 10-12mm either side of the stem.

Nice work Carl! Need to get a Remnant Stormie myself 8)
J

I picked up the newer retro collection boxes for wave 1. FYI - Cards are thicker. No leaflets Retro stickers peel off easier. Big improvement.

On the retro wave one Leia did all the above ok, I even inserted a little blue footer card in the bottom of the bubble what fun we have looks good thou