I'm hoping you can help me get an idea of value for my vintage millenium falcon as I have a couple of interested parties and I'm just not sure of an asking price that's fair to both of us. 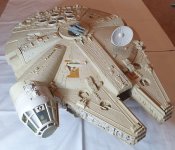 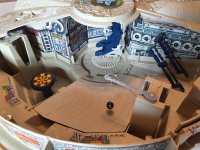 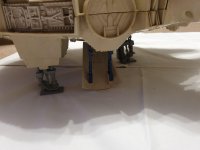 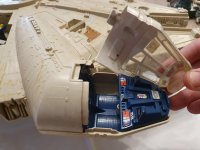 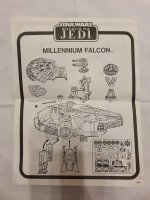 It's not a perfect shell, with some discolouration but there's no cracks or chips and near as I can tell it's 100% complete. So, what's it worth?

That looks pretty nice, I would say it's worth about £150. The Falcon has never been one of the most valuable ships, probably because it's so big.

Yeah I'd agree with Edd's valuation, sadly so big not everyone has the space needed to display it, sadly myself included =(

Due to discolouration and no box, I'd put more like £100 tops.
C

Thank you for the replies guys, I really appreciate it. I've asked £140 for the MF plus an IG-88 figure with an Imperial Blaster. Does that sound about right for splitting the difference between the £100/£150 opinions plus the figure + weapon? Knowing what to ask for figures including that blaster is made complicated by the prices asked for it on eBay varying so much. As an aside how could someone tell what figure a weapon came from? One apparently sold for £79 due to being from a Taiwan Boba Fett figure, but it just looks like a standard imperial blaster to me!
You must log in or register to reply here.