Group P sees the final former champion start their campaign. Biker Scout was the 2018 champion, and is the third most successful figure to date. 2017 runner up as well, quarter finalist in 2016, 2020 and 2021. He will be favourite for this group anyway.

AT-AT Driver has always been popular in the early stages, only once failing at this time. Quarter final in 2014 and 2016 are the Imperials best to date but that does feel some time ago now, maybe this year he will get back to that level.

Squid head, oh Squid Head, in my opinion should always do better and receive more love than he does. Such a great sculpt with so many accessories. But has failed at this stage four time's and the four times he did get through only once won a knockout match and that was back in 2014.

Droopy McCool and Klaatu have never cleared this stage and Bib Fortuna can only claim to have done that once way back in 2016. 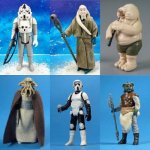 Gotta love a figure with 4 accessories

Squid and Biker Scout for me too, but there will be a lot of love for the Driver I suspect.

The Imperials for me.
S