Hoth Stormie begins his campaign in this group. The second most successful figure ever, although the winter Stormie has never won the trophy. Runner up on three occasions (2014, 2015 & 2018), three finals and never able to get across the line. Hoth Stormie has always reached the third round minimum on every previous tournament, no other figure can boast this statistic.

Tough little group though for the Stormie, Obi-Wan will fancy the group, four times the Jedi has failed at this stage, but three out the last four years he has cleared this stage.

R2 Sensorscope has also only cleared the group stage on four occasions and would love to be the R2 unit going the deepest in 2022. 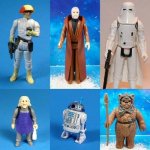 Hoth Stormie dominated proceedings in Group O but second spot was a real tussle. Obi-Wan eventually made it through but only by a vote over Ugnaught, R2 Sensorscope and Cloud Car Pilot