Another interesting group with two major under performing figures through the years.

Darth Vader was a force in the opening years with a semi final in 2014, a quarter in 2015 and another semi in 2016, but then he lost his way, lost in a way that he hasn't actually cleared the group stages since 2018.

Han Solo has also disappointed in much the same fashion, three of the last five years he has failed to clear the group stages and his best is two trips to the third round, not really a decent enough record for such an iconic character and figure.

But it won't be easy for either of them in this group. Leia Bespin has a mixed bag history at the group stages failing as many times as qualifying. Ree Yees has never cleared the group stage, R2 pop up hasn't cleared this stage since 2017 and AT-ST Driver, although an awesome Imperial, has just three second round appearances to his name.

It's a wide open group, who'll step up and seize the opportunity. 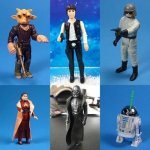 Come Ree Yees! You can win this!

Vader and r2 though it was a hard call

Leia Bespin and Ree-Yees get my vote. I would vote for Han Solo, but can't bring myself to when the picture is of the balloon head version

First 12 for me here

Lord vader get my vote, it is time for vader to win, solo also get my vote
S

Vader absolutely dominates this group but the runners up spot was well fought, leia Bespin progresses by just a single vote over Ree Yees and Han Solo

I am glad that vader won