Group E truly is a battle of Lukes.

With Both Luke X-Wing and Luke Jedi having already progressed, the whiny farmboy may have been thinking that all his incarnations were going to progress, but with three in this one group that can't be the case.
From the three of them Luke Skywalker should really have a better history, in fact, I'd have thought in 8 previous years with no repeat winners that he may have had won one. Runner up in 2016 was his only final appearance where he failed to beat ERG, a couple of quarter finals has been his best since. Luke Hoth has only cleared the group stages three times and Luke Stormtrooper matches that statistic. 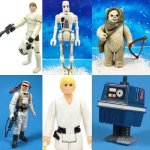 Luke and Gonk for me.

Luke stormie and farm boy Luke for me

Farmboy and Hoth for me
S

Straight forward group with luke Skywalker smashing it out of the park with the group win, his progress makes it 5 from 5 for the first 12 figures who seem to be dominating the early stages this year. Power Droid comfortably progresses in runners up spot